Lew Gantwerk, (School, 1984) was awarded The Ernest E. McMahon Class of 1930 Award for his efforts to extend the university’s educational resources to the people of New Jersey through his work at the Center for Applied Psychology, GSAPP. Under his leadership, the center continues to improve the emotional well-being of thousands of individuals living in New Jersey. This award is given to an individual or a group that has made a significant and creative contribution to the extension of the educational resources of the university to the people of New Jersey.

Lew Gantwerk, (School, 1984) is the 2011 winner of the Peterson Prize. He was the first director of the Center for Applied Psychology, and has contributed to the development of numerous programs and initiatives supporting GSAPP’s service and training mission. At GSAPP, he has worked to expand the practicum program, develop more accessible service delivery formats for high need groups, design high quality continuing education, and provide a warm and supportive environment for clinical and school training. 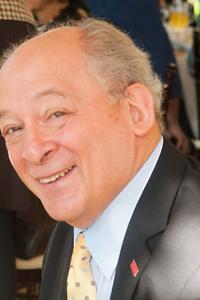 After a distinguished career as a public school principal and superintendent, Lew Gantwerk received his Psy.D. in School Psychology from GSAPP in 1984 and then became the first director of the new Center for Applied Psychology (CAP) in the following year.  He is now the executive director of a thriving facility providing five million dollars of psychological service each year.  Under Lew’s leadership, CAP has become an integral part of training doctoral students at GSAPP, offering a wide range of opportunities for practice and student support through its programs and projects.

Lew developed a highly innovative model for developing CAP projects early on: identify a service need in the community, work with a licensed psychologists to write a grant, respond to a call for grants and develop a contract that would allow GSAPP students in all programs to deliver the services needed under the supervision of a psychologist.  Using this model, Lew has helped to develop and maintain a number of projects that have been mainstays of training at GSAPP, including  the Foster Care Project, which has provided both home and clinic-based mental health counseling to some of New Jersey’s neediest and most vulnerable children for over 20 years; the Tourette Syndrome Project,  which has used a variety of approaches to help children who suffer from a terribly stigmatizing condition for over 10 years; and three other projects focused on improving the climate in New Jersey schools so that children will feel safe, cared for and able to learn (the Character Education Project, the Drug Free Schools and Communities Project, and the Developing Safe and Civil Schools Projects).

There have been many other CAP projects over the past 25 years, including the School-Based Mental Health Services programs in Highland Park and Piscataway, the Natural Setting Therapeutic Management program, the Consortium for Research on Emotional Intelligence in Organizations, the Family Business Forum, the Organizational Psychology Consulting Group, Douglass Outreach (a very successful project that began as a joint project between CAP and DDDC), and the Network for Family Life Education, which has become ANSWER.

The University recently recognized Lew’s work in developing the Center in naming him the 2012 recipient of the Ernest E. McMahon Class of 1930 Award.  This award is given to “an individual or a group within Rutgers University that has made a significant and creative contribution to the extension of the educational resources of the University to the people of New Jersey through such means as continuing education or extramural programs.”

In addition to his work through the Center, Lew has left his mark as a professional psychologist in many other ways as well.  At GSAPP, he has helped to expand and oversee the practicum program, which provides placement for over 100 students each year.  Lew also started the first year supervision groups for both the Clinical Psychology and School Psychology students.  These groups have had a positive effect on the adjustment of students to GSAPP by helping to normalize their experience, get to know their classmates, and start to develop their identity as professional psychologists.

Lew has contributed to the development of GSAPP students through his participation on dissertation committees.  He has served on over 100 committees as either chair or second reader.  One of the dissertations that he chaired recently won the Cyril Franks award for the best dissertation of the year.

Lew has made important contributions beyond GSAPP as well.  At Rutgers he chaired a committee charged with looking at the needs for mental health services as the University went through the reorganization of its undergraduate colleges.  He then served on the search committee for the director of the new, integrated counseling services.  He also has served on a committee appointed by the executive vice president for academic affairs to assess the way in which the Counseling Center manages mental health crises.

Lew has provided invaluable service to the state of New Jersey through his pro bono involvement as chair of the New Jersey Psychological Association’s Colleague Assistance Program for 20 years.  This program was developed to help psychologists who were experiencing distress, which had compromised their ability to practice, or who were in need of supervision or treatment.  The committee provided consultation, referral and prevention services.

In summary, Lew’s many accomplishments have helped GSAPP become the premier Psy.D. program in the nation.  Don Peterson, as the first dean of GSAPP, as the father of professional psychology in America, and as someone who was personally touched by Lew’s caring and commitment would have been very pleased with the choice of Dr. Lew Gantwerk for this year’s award.