A Conversation with Malin Fors: A Grammar of Power in Psychotherapy

A Conversation with Malin Fors: A Grammar of Power in Psychotherapy

Societal issues based in power and privilege inevitably enter the therapy room. Clinical psychologist and psychoanalyst Malin Fors addresses disparities in social privilege and their practical implications for psychotherapists. Fors posits a matrix of relative privilege that includes four core patient–therapist dynamics: similarity of privilege, privilege favoring the therapist, privilege favoring the patient, and similarity of non-privilege. In this lecture, she will address some limits of the cultural competency paradigm and explore how clinicians may act out of privilege and own their mistakes. She will comment on the tendency in many human rights movements to split between the presumed enlightened, good-hearted, anti-racist/feminist/pro-queer therapists (as we want to see ourselves) and the bad other (often a stereotyped heterosexist male white therapist). Fors will argue that we have to talk about a more honest self-reflection and address how relative privilege is played out in the therapeutic relationship (in transference, countertransference, and resistance) regardless of the therapist's social positions.

Malin Fors is a Swedish psychologist and psychoanalyst living in the world’s northernmost town, Hammerfest, Norway. She has worked for a decade at the local hospital’s psychiatric outpatient unit and in private practice. For over 10 years, as a guest lecturer at Gothenburg University in Sweden, Malin has been teaching students about the ways in which power, privilege, and gender create biases in the assessment of psychopathology. She is an assistant professor at the University of Tromsø, the Arctic University of Norway, where she teaches medical students on topics of diversity, privilege awareness, and critical perspectives on cultural competency. In 2016, APA's Division 39 and APA Publications awarded her the Johanna K. Tabin Book Proposal Prize for her proposed "A Grammar of Power in Psychotherapy." After the book's publication in 2018, she made an APA DVD in the Therapy Series: The Dynamics of Power and Privilege in Psychotherapy. 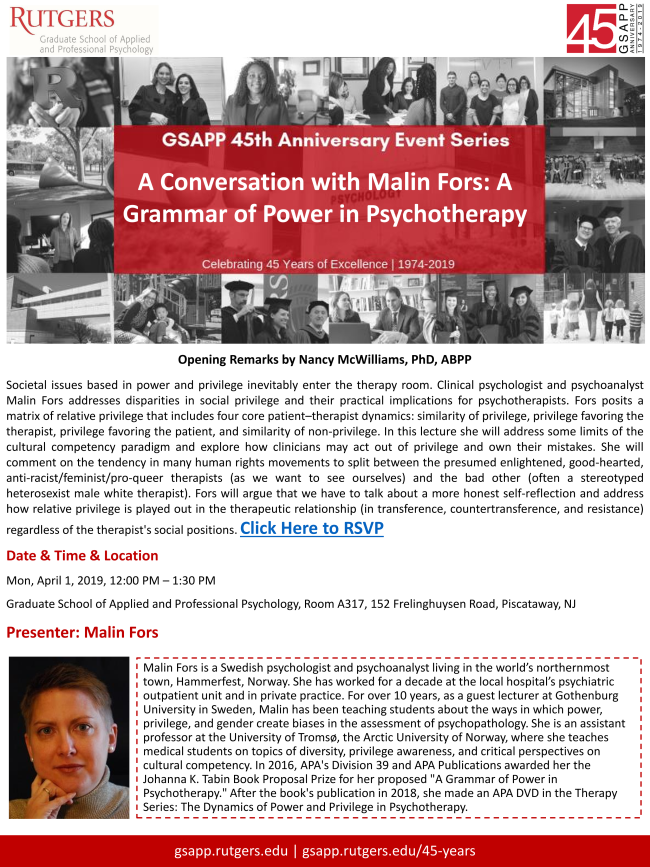