The Peterson Prize Has Been Bestowed upon Dr. David B. Sacks 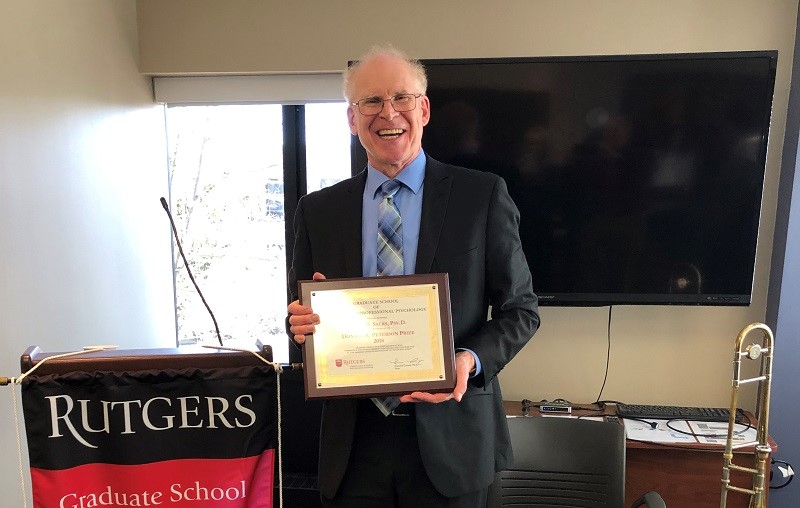 One of GSAPP’s most distinguished awards, the Peterson Prize, has been bestowed upon David B. Sacks, PsyD, ABPP. This award was named for Donald R. Peterson, the first dean of GSAPP, to recognize an alumnus for outstanding contributions to the profession. On February 19, 2019, Dr. Sacks gave a presentation on "Music, Psychology, and a Quest for Community" and gave a fantastic trombone performance at GSAPP.

Dr. Sacks (Clinical, ’93) has served as director of clinical training at the American School of Professional Psychology, Argosy University Northern Virginia, since 2006. In that role, he oversees practicum and internship placements for clinical PsyD and M.A. students, as well as teaching and overseeing student research. He previously served for eight years as chief psychologist in the Child and Youth Services Administration of the D.C. Department of Mental Health, directing an outpatient clinic and overseeing mental health services in juvenile detention centers. For five years, he conducted play therapy and parent counseling at the Staten Island Mental Health Society. While at GSAPP, he completed clinical externships at Gouverneur and Bellevue Hospitals, and an internship at Beth Israel Medical Center, in New York. His dissertation, “Recent Brazilian Immigrants to the U.S.: Human Service Needs and Help-Seeking Behavior,” was based on interviews (in Portuguese) in Newark’s Ironbound district and chaired by Milt Schwebel, with Cary Cherniss and John Rosado as committee members. His current interests include the role of professional psychologists in civic engagement, revitalizing democracy, and community building; and clinical supervision and training. He maintains a private practice of psychotherapy in Chevy Chase, Maryland, integrating psychodynamic, cognitive-behavioral, and family systems approach; and continues to play trombone in Brazilian bands around Washington, D.C., and on visits to Brazil, including a recent appearance on the Café Lá em Casa show.