Jordan Hines, a participant in the Supporting Community Access through Leisure and Employment (SCALE) program, was awarded Employee of the Semester at the Cook/Douglass Recreation Center on Thursday, February 6th. SCALE is a unit within the Rutgers Center for Adult Autism Services (RCAAS) that works with adults with autism spectrum disorder (ASD) and provides them with vocational training and employment opportunities on campus. Jordan was hired at the Cook/Douglass Recreation Center last year. Every semester, one of the over 600 employees at the Rutgers Recreation Centers is awarded the Employee of the Semester position by their peers. This semester, Jordan's co-workers wanted to commemorate his hard work and attention to detail and named him their most valued employee.

Jordan works as an equipment technician at the Cook/Douglas Recreation Center, meaning that he is responsible for maintaining all of the gym equipment and technology within the facility. His supervisor, Jason Degennaro, said that having Jordan around makes life easier. He stated, “Jordan really cares about his tasks, and is consistently a diligent and meticulous worker.” He also noted that while the recreation center benefits from having Jordan as an employee, Jordan has greatly benefited from working there as well.

When Jordan first started his position, he was shy and generally closed off from his peers. Today, Jordan is much more friendly and open with people. He is happy to be at work and feels comfortable speaking with his co-workers. James Maraventano, Ed.D., BCBA-D, the director of the SCALE program, also noticed Jordan’s vast improvement. Dr. Maraventano states, “Jordan is so proud of the work he does for Rutgers Recreation. He is an incredibly hard worker and we are thrilled that Rutgers Recreation has recognized him for his contributions. Well done, Jordan!” It is easy to see how much the support given by RCAAS has helped Jordan to grow.

Aside from the title of Employee of the Semester, Jordan also won a gift card and a doughnut of his choice. When asked about winning the award, Jordan said that he was really happy about it. He said that he truly likes coming to work and thinks that he is good at his job, and is glad that his peers are able to see that too. He also stated that he couldn't wait to use his gift card on his next trip to Wendy's for him and his mom. 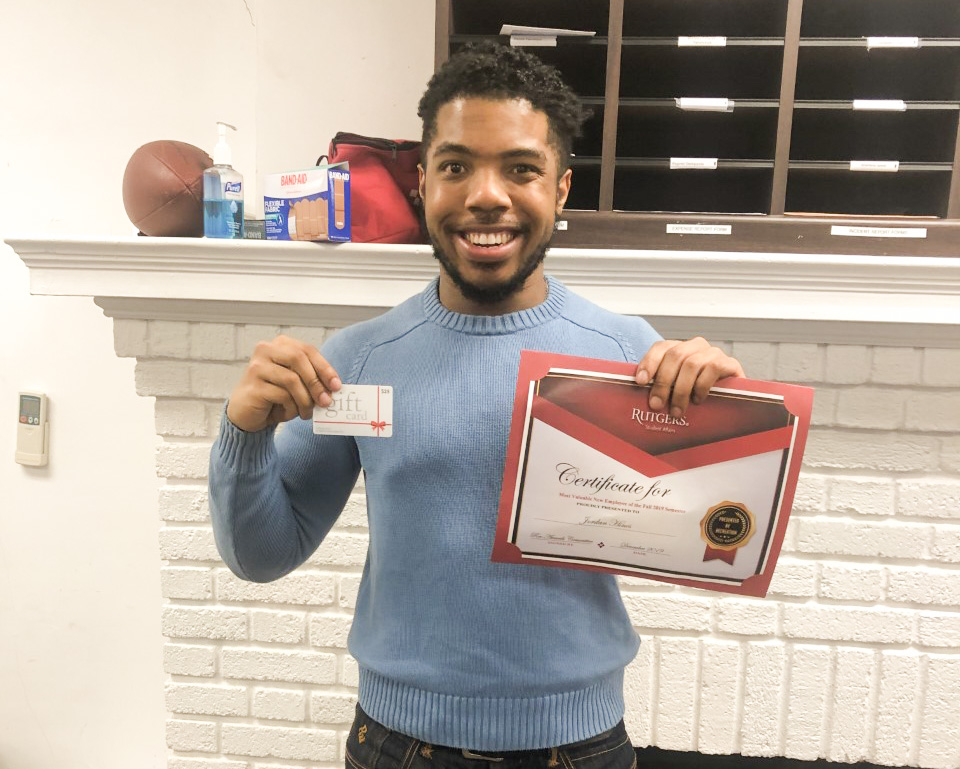